This fan was inspired by perpetual motion technology.  Just flick the fan blades and off it goes!

Perpetual motion cannot truly exist on earth given the known laws of physics. Honestly, this fan might only generate it's own power for a few hundred years due to an eventual loss of magnetism, but that is hundreds of years of independently functioning use! Another common critique of "perpetual" motion technology is that "enough"energy cannot be harvested. Both the "perpetual" and the "energy collection" were disregarded, and this technology was used for what it was good at, making something spin in a circle for a long time.

Adjusting climate through the movement of air has an opportunity to reduce the nearly 25% of greenhouse gasses caused by heating and cooling buildings. Most climate control systems already implement a fan of some sort, but those too are pulling energy from a grid that still relies on the creation of greenhouse gasses. This is an energy independent technology. A very small amount of energy is generated while the fan is in operation, and stays within the system keeping the fan in motion without engaging with any ongoing external energy source.

In addition to addressing climactic problems, this fan is also safer for users, the blades do not have a typical motor propelling them and do not present the same risk to small digits. Additionally, the absence of external wiring may prevent many electrical fires. 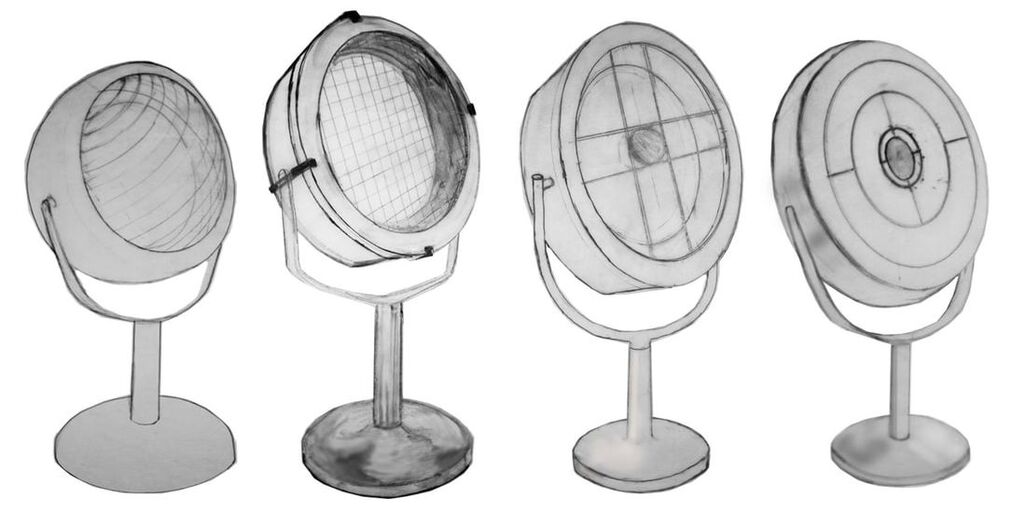 Above are sketches further exploring the aesthetic possibilities for this product. Below are images of the initial prototypes. Advancements in battery technology paired with further input from an electrical engineer proved that this shape was no longer necessary to accommodate the amount of hardware initially thought necessary.
Practical Prototypes: On the bottom left, is the initial and literal circuit board that had too much resistance to properly function. To the right is a working Bedini Motor that served as proof of concept.